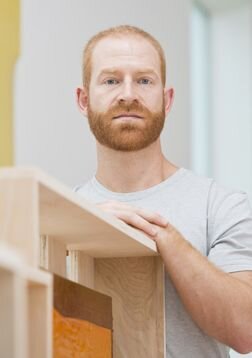 Joseph Cohen is an artist who collaborated with the Memorial Sloan Kettering Cancer Center and invented a paint that could be used to detect Cancer, Diabetes and High Blood Pressure. He received his B.F.A. in Painting, Summa Cum Laude at the Texas State University in San Marcos, Texas. His M.F.A. in Painting was at the University of Texas in San Antonio, Texas. He has spent several years embedded in top research labs with scientists, immersing himself in their work.  From 2015 – 2019 he was a Memorial Sloan Kettering Artist Residency and worked with Daniel Heller’s, Ph.D, laboratory team. Heller’s team is harnessing the luminescent properties of carbon nanoparticles to help detect cancer at earlier stages and target treatment therapies for metastatic cancer tumors. Cohen’s work with carbon nanotubes—forms of carbon with a cylindrical nanostructure—follows a similar search and find mission. He is a member of the National Organization for Arts in Health and The Electrochemical Society.  His collections, to name a few, have been shown at the Museum of Fine Arts Houston, Houston, Texas, University of California, Fullerton, California, Hospital Leon Berard, Lyon, France and the MD Anderson Cancer Center, Houston, Texas.